Claudius Wagemann is the ProDem Project Coordinator. Nils Sartorius is the Executive Coordinator. In Frankfurt, they are supported by László Boroffka and Maximilian Propadalo. Heike Langholz is the central coordinator of the project budget.

The ProDem Team and the Project Work Packages

The PIs and their teams share strong research interests in protests, social movements, movement parties, civic participation, and the media. Their country expertise, methodological and theoretical profiles, and skills complement each other in ways that enable successful implementation of ProDem’s ambitious research design.

Dan Mercea is Reader in Media and Communication in the Department of Sociology at City, University of London. Dan is the PI of the UK research unit and the coordinator Work Package 1 (WP1). WP1 examines the varying degrees of participation in protests and electoral support for movement parties across six Eastern and Western European countries. This is achieved by means of a representative, cross-national survey. ProDem investigates whether and under what conditions extra-institutional participation is a key correlative to support for movement parties.

Hannah Curran-Troop is a third-year PhD student in the Sociology Department at City University. Her PhD project researches contemporary feminist organisations in London’s creative and cultural industries, with a focus on labour, affect, precarity and the political imaginaries within these organisations. Hannah also works at the Gender and Sexualities Research Centre at City.

Eryn Parker is a Research Associate on the ProDem project working alongside the research unit in the UK. In addition to her work with ProDem, Eryn is a PhD candidate in Sociology at City, University of London where her research focuses on the impact of new media on culture, society and policy. She is particularly interested in the impact of digital technology on wilderness spaces.

Toma Burean is Lecturer at Babeș-Bolyai University, College of Political Science, Public Administration and Communication, Political Science Department, Cluj-Napoca, Romania. Toma is the PI of the Romanian research unit and coordinates WP2 which examines the discursive strategies through which previously disaffected citizens are mobilised and (re)included into institutional politics. The WP thus aims to gauge the role discursive strategies play in mobilising citizens and how social movements and movement parties politicise conflicts as well as enhance or hinder socioeconomic and cultural inclusiveness.

Diana Margarit is Associate Professor at the Alexandru Ioan Cuza University of Iași, Department of Political Science, International Relations and European Studies and, currently, postdoctoral researcher at Babeș-Bolyai University, Romania. Her research covers social movements, protests and civic activism in Romania. On the ProDem project, Diana works on WP2 alongside her colleagues in Cluj.

Dana S. Trif is an international relations scholar working at the interface between politics, law, and ideology. Her PhD in Political Science was awarded by the Freie Universität Berlin and was distinguished with the 2015 Stiftung Überlebensrecht Prize. Dana is a researcher on the ProDem team at Babes-Bolyai University. Her work on WP2 focuses on the creation of collective identities and their impact on the democratic policy-making process.

Alexandru Polgar is Research Assistant at Babeș-Bolyai University. Alongside the other members of the team in Cluj he works on WP2. A philosopher by training, he is the author of two books: The Difference Between Heidegger’s Concept of Market and That of Granel (2013) and Politics (2015).

Lorenzo Mosca is full Professor of Sociology of Communication at the State University of Milan. He is the PI of the Prodem Italian research unit and the coordinator of WP3. This WP focuses on the transition of movement parties between the protest arena and the institutional arena. The research objective guiding WP3 concentrates on how the relative electoral success of movement parties affects their relationships with the media.

Fred Paxton is a Postdoctoral Research Fellow at the Department of Social and Political Science at the University of Milan. Fred is completing his PhD at the European University Institute, with a thesis on populist radical right parties in local power in Western Europe. As part of WP3, he will focus on the interactions between movement parties and the traditional media.

Andrea L. P. Pirro is Research Associate on the ProDem project. Andrea is assistant professor in the Faculty of Political and Social Sciences, Scuola Normale Superiore, Florence. He is editor of the journal East European Politics, editor of the Routledge Book Series in Extremism and Democracy, and steering committee chair of the European Consortium for Political Research (ECPR) Standing Group on Extremism and Democracy. He has published on far-right politics, populism, Euroscepticism, and mobilisations in the electoral and protest arenas. He has authored The Populist Radical Right in Central and Eastern Europe: Ideology, Impact, and Electoral Performance (Routledge, 2015) and edited three special issues.

Diego Ceccobelli is a Research Associate on the ProDem project. Diego is senior assistant professor in Sociology of Communication at the Department of Social and Political Sciences of the University of Milan. He holds a PhD from Scuola Normale Superiore (Florence, Italy), where he also worked as postdoctoral research fellow.

Saija Räsänen is Research Associate on the ProDem project working alongside the research unit in Italy. Saija is a PhD candidate in the Sociology and Methodology of Social Research (SOMET) joint doctoral program of the Universities of Milan and Turin. Her PhD project compares media coverage and political communication of Italian and Finnish populists, concentrating on the change in their communication when they leave the opposition and enter governments. On the ProDem project, she will conduct a media analysis on Finnish populism.

Robin Piazzo is Research Associate on the ProDem project working alongside the research unit in Italy. Robin is a PhD candidate in the Sociology and Methodology of Social Research (SOMET) joint doctoral program of the Universities of Milan and Turin. He is currently working on a research on the transformation of organization and mobilization in the Labour Party under Jeremy Corbyn’s leadership.

Christina Neumayer is Associate Professor of Media Studies at the Department of Communication, The University of Copenhagen. She is PI of the Danish research unit and responsible for WP4. In this work package, Christina and her team assess social movements’ and movement parties’ use of social media, focusing on the linkages they develop with other actors over time. They investigate how social media linkages between movement parties and civil society actors as well as media and political institutions vary with their electoral success or failure.

Matthias Hoffmann is Postdoctoral Researcher at the Department of Communication, University of Copenhagen. Matthias was awarded his PhD by the University of Trento for a thesis on digital networks of collective action against asylum-seekers and refugees in Germany. Before joining ProDem, he was a research fellow at the Weizenbaum Institute for the Networked Society in Berlin. In WP4, Matthias analyses the usage of social media by social movements and movement parties.

Claudius Wagemann Claudius is full Professor of Political Science at the Goethe University Frankfurt, focusing on qualitative empirical research methods . Claudius is the Principal Investigator (PI) of the German research unit and responsible for WP5. Taking a policy analysis perspective, WP5 concerns the transition of social movements’ political demands into the political system, providing a triple comparison between the agendas of social movements, movement parties, and governments. Methodologically, pulling together information from the other WPs, WP5 combines textual data collection for content analysis with a macro-comparative approach to data analysis that uses comparative process tracing and fuzzy set Qualitative Comparative Analysis (QCA).

Nils Sartorius is a Lecturer and Research Fellow at the Institute of Political Science at Goethe University Frankfurt. Nils’ research focuses on the conception and perception of country images with a special focus on crises. Methodologically, he is an expert on textual data and qualitative content analysis. In addition, Nils is a Research Associate on the ProDem project working alongside the whole group and especially WP5 and the German research unit.

ProDem will additionally welcome the involvement of two early-career researchers with complementary expertise, who will advise the team at various points in the course of the project.

Dr Berk Esen is Assist. Prof., Sabanci University, Istanbul, Turkey. Berk’s research interests include the political economy of development, party politics and authoritarian regimes with a focus on Latin America and the Middle East. He has published in leading journals including Party Politics, Journal of Democracy, PS: Political Science & Politics, South East European Society and Politics and is a recepient of the Sakıp Sabancı International Research Award for his work on democratic backsliding in Turkey and Hungary.

Anna Napoletano is a PhD student in Political and Social Sciences at the University of Bologna. Previously she obtained a master degree in Philosophy and Forms of Knowledge at University of Pisa and a master degree in Comparative Politics at Radboud University Nijmegen. Anna researches populist movements and parties and her PhD project focuses on populist influence in government. On the ProDem project, Anna is supporting the Italian team on the study of the relationship between the Five Star Movement and the media. 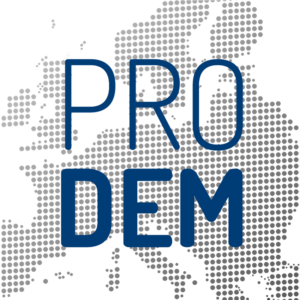